Willetta Grand is a condominium located in downtown Phoenix that incorporates a twist of modern and vintage. The community encompasses two buildings, one renovated from the early 1900’s and the other a brand new project, that both compliment each other to create a new beautiful community.

Willetta Grand condos feature two different buildings, each with their own unique offerings. The first, an already existing early 1900’s home consisting of 5,200 square feet, built with oversized windows and high ceilings. This building was divided into four spacious 1,200 square foot condominium homes that stand today, with all of the pristine detail that the vintage home previously had. The second building consists of four brand new 1,200 square foot condos, reflecting the other building with equal pristine details. Both buildings are separated by a lush interior courtyard designed by a famous local architect Michael Underhill. Make your new home in one of these exquisite buildings today, and live in luxury.

Located on the north side of the I-10 and 7th street, Willetta Grand is within walking distance of everything in downtown and midtown Phoenix. Restaurants, shops, grocery stores are all at your fingertips, plus the community is only seven blocks to the Phoenix Light Rail Roosevelt Station. Located in the prime location of downtown Phoenix, Willetta Grand puts you in the center of everything.

What Residents Love About the Downtown area

Midtown Phoenix is north of I-10 to about Camelback Road and from about 15th Ave to about 16th Street.  What a great area of old and new.  Many of the city’s historic districts are located in or near this area.  Midtown has been a very popular place for “In-fill” communities.  In-fill is what the city encourages developers to buy up under used land and built private homes or commercial buildings.  Both have increased in construction since the recession has ended so you’ll fine many great properties.  Most of Midtown is walkable to Central Ave and the Phoenix Metro Light rail stations.

If this community isn’t exactly what you are looking for then let Brokers Hub Realty help you find your perfect home by showing you some of the many other wonderful condos in the Phoenix, Tempe and Scottsdale area. If you need to sell your current residence, we can help you there as well.

Come fall in love with this fully remodeled beauty! It counts with spacious 3 Bedrooms, 2 Baths, Custom Master Bath and Much More. Wood Like Ceramic Tile all throughout, ...

GREAT HOME FOR A BIG FAMILY WITH 4 BEDS 2 BATH, CASITA IN THE BACK AND A UNFINISHED ROOM TO CONVERT IN A 6TH BEDROOM. RV GATE,LOTS OF PARKING SPACE AND A DIVING POOL. SEL...

A nice central Phoenix neighborhood awaits you. This will be a rehab or update special for someone. It has been a rental for many years so the landscaping is non-existent...

THIS BEAUTIFUL SPACIOUS PROPERTY HAS LOTS OF CABINETS AND STORAGE, FANTASTIC ENTRYWAY, LIVING ROOM AND DINING. FOURTH BEDROOM HAS TWO WALK-IN CLOSETS AND CAN BE USED AS G...

Looking for a new place to call home? This energy-efficient beauty is the one for you! Providing a low-care front landscape. Discover a fantastic interior filled with lux...

Don't miss the opportunity to own this unique corner lot home located in popular Phoenix! The beauty is in the details of this home with arched entryways, sunken living r...

Amazing city living in the heart of the Biltmore corridor! Come view this 5th floor, east facing unit that brings together a beautiful 2 Bed, 2 Bath floor plan with priva...

Nestled in the exclusive Biltmore Highlands, this one of a kind home offers views like nowhere else in Phoenix. Enjoy amazing 180 degree mountain and sunset city views fr...

FANTASTIC OPPORTUNITY! -This 3 bedroom, 2 bath home built in 2007, located at the end of a quietcul-de-sac off Central Avenue. Home has a freshly painted interior making ...

Great opportunity to make this home your own. Large backyard with a beautiful, mature shade tree. This home is in a great location, with easy freeway access and is jus...

No HOA! Great investment opportunity to build a New home or Multi-family residence or rehab for increased property value.. One bedroom one bath. Property is being sold as...

The House - Incredibly charming, custom plantation style home in Arcadia. Wake up in the morning to views of Camelback Mountain on your wrap around porch. Enter through ...

A unique opportunity to own a larger home with detached guest house in the popular cox village neighborhood. Home features over 2000 sq ft of living space and is open t...

Who is looking for the fix up bargain? 3 bedrooms 2 baths with nice bones. The roof and AC look to have been replaced in the past 10 yrs and in good shape the interior ...

Nestled in the shadows of South Mountain this meticulously maintained home offers a serene setting with an array of active lifestyle opportunities at your doorstep! Unwi...

Finally, your opportunity to own a great home w/ soaring ceilings & a big back yard in the desirable Shadow Canyon community. The architectural details you find in this h...

Move-in ready 2 beds, 2 baths condo unit in a highly sought after Portofino. Located right across from the gorgeous lake and close to I-10, 202, 101 freeways, shops & re...

Photos coming soon. Amazing NE Phoenix location. Nice upgrades throughout. Great open floor plan with 3 bedrooms and 2 full baths. The home is on a corner lot and has a ...

The ONLY MOVE-IN READY 4 BEDROOM HOME IN THE AREA PRICED NEAR $500K! Enter through the CUSTOM GATE to a private courtyard. Clean architectural lines feature clerestory wi...

This Phoenix one-story cul-de-sac home offers a patio, and a two-car garage.

Echo Canyon, with its rich history, is nestled against the World renowned Camelback Mountain. This home is being done by Bedbrock Development with it's contemporary desig...

Lake community with Mountain Views! This full remodel is absolutely beautiful! Upstairs end unit with all one level interior. This one bedroom has separate den with doo...

This is a wonderful Colony Biltmore I home that has beautiful travertine floors and a great quite location! Inside Colony Biltmore Greens, there are community tennis cou...

Family owned since 1999. This loving 3/1 home has been well cared for inside and out. Just needs your final touch in the kitchen to make it your own. The spacious fro...

Located in Pointe Tapatio with beautiful North Mountain Park views, this home has it all! Located on a tranquil street you'll find 5 bedrooms and 3 bathrooms, with 1 bedr...

This charming turn-key North Phoenix ranch style home is brimming with potential and ready to greet you with positive vibes throughout! Featuring 3 bedrooms, 2 bathrooms,...

!!! ATTENTION ALL INVESTORS !!!WE PRESENT YOU WITH A GREAT OPPORTUNITY TO BUY A HOME, FIX IT UP, AND SELL IT FOR A SOLID PROFIT WHICH WILL MAKE IT WORTH YOUR TIME, WHICH ...

Located in North Phoenix just North of Tramonto. Here's the opportunity to build your custom dream home on an elevated hillside lot with stunning city and mountain views ...

Looking for a place to call home in Downtown Garfield Historic District? This is it! This one has a 2 car garage which is RARE to find in Garfield! You'll FALL IN LOVE w...

Amazing Homeowner or Investor opportunity in Paradise Hills! This unit is a MUST SEE, clean and move-in ready! This beauty features 2 bedrooms, and 1.5 baths. Kitchen off...

Enjoy this courtyard condo in Arcadia Lite. centrally located and minutes to Biltmore area and the hottest restaurants like the LGO & Beckett's Table etc.... new floors, ...

COME AND VIEW THIS BEAUTIFUL HOME, IT HAS A VERY OPEN FLOOR PLAN WITH 3 BEDROOMS, 2 BATHROOMS, THE WHOLE HOUSE HAS BEEN PAINTED FROM THE OUTSIDE TO THE INSIDE, THE PLUMBI...

Fantastic home in sought after location! This home has fresh interior paint. Discover a bright and open interior with plenty of natural light and a neutral color palate, ...

Come take a look at one of the largest lots you will ever find in desirable Trailwood in Phoenix! Nestled on a large premium cul-de-sac. It offers 4 beds, 2 baths, and a ...

Get ready to call this 3 bedroom, Ahwatukee Foothills BEAUTY home! Nestled at the base of the South Mountain Preserve with backyard access to several trails, makes this h...

So much potential here on this property. Never has lot been split, so the potential to build many more units on this large lot. Buyer to verify all info. 1 - 4 plexes,...

Single Family house with 3 beds and baths that needs some TLC. Perfect for investors! The whole place needs a very deep clean. Damage to some of the doors, some need pain...

A 5 ***** hotel lifestyle but you can own it! Biltmore Terrace elegant, sophisticated home designed and completely renovated by award-winning Interior Designer. Lower le...

Don't miss this fresh, quality professional remodel decked out with all the latest luxury finishes. Award winning designer got a hold of this one and WOW, nothing like yo...

Modern Townhouse Perfection! Located in one of the trendiest areas in Downtown Phoenix. Aka as the Evans Churchill neighborhood within Roosevelt Row (a vintage - yet new ...

Beautiful Pulte home located in the highly sought after community of Fireside at Desert Ridge. 2 story with balcony. 4 bed 2.5 baths, office, and large laundry room with ...

Fantastic Central Phoenix location in a quiet subdivision with mature landscaping, relaxing resort like community pool area with beautiful trees and the home is set back ...

This Beautiful, Remodeled Home is in a private neighborhood on a cul-de-sac. Lots of improvements and upgrades include: New Windows, New Front Door, New Carpet, New HV...

This amazing 3 bed, 2 bath newly updated home in an amazing location. Near to amazing schools and universities, fine dining and entertainment, light rail and the iconic M...

Highly sought after William Lyon home in the gated community of Desert Crown at Sonoran Foothills. This spacious 4 bedroom 2.5 bathfloorplan with large covered patio and ...

Location, location, location. If you've been waiting for the perfect lot in the heart of Arcadia, this is it! Build your dream home on this one of a kind property with go...

Come and see this beautiful and spacious remodeled home! MOVE-IN-READY!Centrally located with easy access to freeways and also a close distance to Downtown Phoenix and in...

This lovely 2 bedroom, 2 bath home is in the heart of Arcadia. Cozy, all on one level with a lovely back patio. Built in barbque and low maintenance back. Dual pane wi...

This charming residence is waiting just for you! Freshly updated/remodeled four bedrooms two bath ranch-style home. Other updates include a newly remodeled kitchen and ba...

No HOA. This 4 bedrooms 2 bath home includes a bonus room off the laundry room that can be used as a den. Ceiling fans in all rooms including kitchen. Master bathroom wit...

Welcome home to your fully remodeled 3-bedroom, 2-bathroom house., This is a completely ready move in home in a quiet neighborhood with 2-car garage, ready to move in! Lu...

This two bedroom two and a half bathroom condominium on the 8th floor of Crystal Point has been completely remodeled from floor to ceiling. This property was remodeled n...

Updated and ready to move in at a great price! This gorgeous single level North Phoenix home features new granite counters, tile flooring throughout the living and traffi...

*VALUE IS IN THE LAND AND INTENSE SITE WORK* This Camelback Mountain Mansion is the HIGHEST HOME on the south face of Camelback Mtn with breath taking skyline & city lig...

A fantastic single story home that has been remodeled. Enjoy your own private pool for those warm summer days. Whole home solar system makes utility payments virtually no...

Welcome to this beautiful 3-bedroom home located in the heart of popular Moon Valley! A great floor plan with an inviting front living room. A separate formal dining spac...

All information should be verified by the recipient and none is guaranteed as accurate by ARMLS. Copyright 2022 Arizona Regional Multiple Listing Service, Inc. All rights reserved.

Looking for the perfect home? Check out the different communites below! 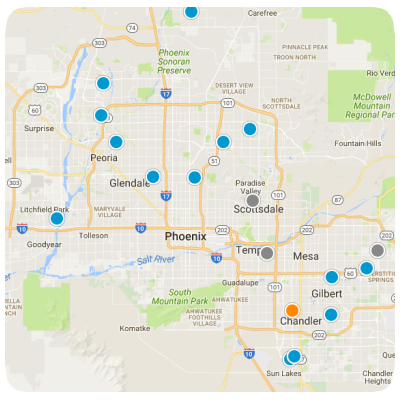