Living Downtown Phoenix is different than other major metropolitan cities in the US.  Phoenix 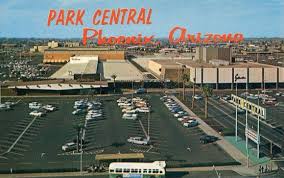 downtown is relatively small within 90 square blocks.  There was a streetcar but in October of 1947 there was a terrible fire that destroyed most of streetcars.  Since it cost so much to rebuild and city buses where all the rage, the city decided to abandon the street cars and buy city buses.  By the end of the 1960's, Park Central Mall at Osborn Ave and Central Ave took all the larger stores from downtown.  At the same time, cars were more popular than ever and many family's had 2 cars so they could move out of the downtown area.  Thus the beginning of the end of downtown Phoenix.

Downtown Phoenix is still one of the hottest markets in the metropolitan area.  Residents have been coming back for over 15 years.  With the Great Recession over more housing units are being built.

There is housing all over downtown and as you see, more is coming.  If you like the urban life you really have choices in downtown Phoenix.  I really enjoy a little bit of a neighborhood feel but with restaurants and shopping just outside my front door.  So I choose to live in the Roosevelt Row Arts District in the historic Evans-Churchill Neighborhood of downtown Phoenix.  This area has commercial and residential zoning mixed together.  In fact, my condo has both zoning's so I live above my office, pretty cool. 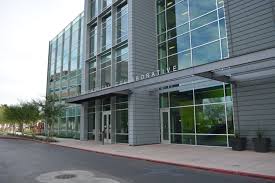 The science and research area has the UofA medical school and T-Gen and Arizona Biomedical Collaborative is just south of the Arts District.  There were talks about a downtown hospital but the Great Recession stopped the talks and I haven’t heard anything new lately.

Of course there’s the sports and entertainment area which covers most of downtown on the east side of Central Ave.  There’s the Convention Center, Ball Park, Basketball Arena and all the sports bars around them.  There’s also Symphony Hall and Herberger Theater too. 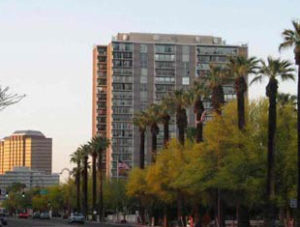 If you like the high-rise life, we don’t have a lot of high rise condos but we have a wide selection.
From mid-century Executive Towers and Regency House, both impressive addresses in the early ‘60’s when they were built.  To humble but fun Embassy Condos that was originally a hotel.  The drive up front door had the pool above in and was very chic in its day.  There’s also the Summit at Copper Square and 44 Monroe for contemporary high rise living.