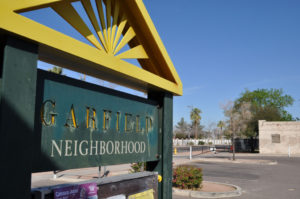 The Phoenix Garfield Historic District is very eclectic, at least the properties are.  There are large and small  and old and new single family homes and apartments.  The apartments are mostly 1 bedrooms.  The community has gone from a nice lower income working class neighborhood of the 1930's to gangs and such in the 80's and early 90's to the historic community that is it now.

How it Garfield get here?  Well, Garfield was developed from 1883 to 1955. The neighborhood was one of the first additions to the original Phoenix townsite. It is also an excellent example of a “streetcar subdivision,” where residential development was directly related to the establishment of a streetcar line through the neighborhood.

In 1895, the Phoenix Street Railway extended their streetcar line through the Dennis Addition. Called the Brill Line, it ran along Pierce Street to 10th Street and then north to the Brill Addition, which was located just north of the Dennis Addition.  Brill is now located on the north side of I-10.  Most is Good Samaritan Hospital (where I was born).   It goes east to 16th Street and there are some very cute homes there, but I digress.

One of the best kept secrets of Central Phoenix is Rito's Mexican Food.  They are celebrating their 41st anniversary in Oct, 2017.   The place is just south of Roosevelt on 14th Street.  Don't look for a sign, they don't have one.  Just look for a bunch of cars parked outside. It's cash only and take out only but nobody cares.  They are soooo good and they cater.  That's Rito's below.  You can see the building from Roosevelt.  I absolutely love their red chili and their tacos. 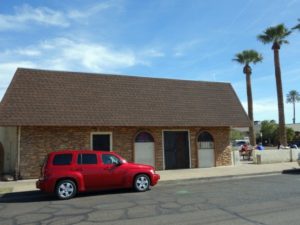 The Garfield Historic District contains primarily modest bungalows and Period Revival style homes but it also includes a noteworthy concentration of older turnof-the-century structures, including the largest concentration of “Pyramid Cottages” in Phoenix.

Commercial establishments and small businesses also flourished at that time, particularly at the corner of 10th and Pierce streets where the streetcar line turned north.

American Way Market is on the corner of 10th Street and Pierce in the Garfield Historic District.  This is known as the Four Corners of Garfield.  The building is being renovated and will be Gallo Blanco restaurant.  Across the street at the Four Corners the 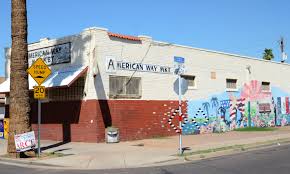 Welcome Diner is coming down from Roosevelt.  Locals will drive a lone way for these two restaurants and the neighbors will love this.  These buildings have been there since the 1930's and the Phoenix Street car turned west on Pierce and north on 10th Street right here.